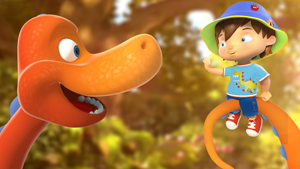 A Canadian company has come on board animated production Boy and the Dinosaur from transatlantic producer-distributor Foothill Entertainment.

The deal means the series will be a coproduction between Shooting Star Animation in the UK and Echo Media in Canada, with Foothill handling worldwide distribution outside the copro territories.

Foothill said it has already secured presales to several broadcasters in major territories and is set to make the announcements shortly.

The series follows the unique relationship between a young boy and his friend and mentor Dinosaur at the family home where they both live.

Echo Media are the producers behind Canadian series Toopy and Binoo as well as the live-action series 19-2.

Shooting Star, meanwhile, was established by veteran licensing and animation executive Russell Dever and also counts toons such as Rollie and Friends and the TV Trevor Show on its slate.