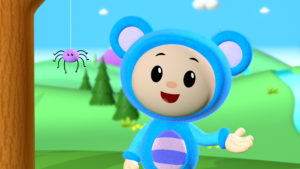 Mother Goose Club is a YouTube sensation receiving over 6 billion views to date. The announcement was made by Jo Kavanagh Payne, CEO, Foothill Entertainment, and Harry Jho, CEO, Sockeye Media. Under the terms of the agreement, Foothill Entertainment will present the series for the first time at MIPJunior and MIPCOM. 52 x 11’ episodes—featuring new, never-before-seen content—are available for broadcast and multi-media platforms.  Foothill Entertainment will also act as co-executive producers and co-develop with Sockeye Media an all-new CGI-animated version of Mother Goose Club series for the global marketplace. Created by educators and parents of four, Harry Jho and his wife Sona Jho of Sockeye Media, Mother Goose Club was developed to fill a gap that they identified in the children’s programming space. Featuring a cast of six colorful characters who bring classic nursery rhymes and original songs to life, the emphasis on words helps young children learn language skills, while the infectious rhythms and melodies, that are the hallmark of the Mother Goose Club songs, inspire them to get up and dance. Combined with compelling animated segments and backgrounds, Mother Goose Club has proven to be hugely appealing to children worldwide, and equally to parents, with its mission to promote childhood literacy. “We are delighted to be working with Harry and Sona Jho to introduce the entertaining and engaging Mother Goose Club series to traditional and new media platforms around the world,” commented Payne, CEO of Foothill Entertainment. “Mother Goose Club is a proven YouTube hit, and our new episodes meet the needs of todays families who want multiple choices for where to watch TV together, whether that’s online, streaming, or in their traditional living room environment.  Given the enormous popularity of the series, we are very excited to work with Sockeye Media to also develop the new story driven CGI-animated series.” “We believe in bringing Preschool to the World,” said Harry Jho, Co-Creator of Mother Goose Club. “That mission is at the forefront of what we do at Sockeye, so the opportunity to work with Foothill and potentially reach broadcast audiences all over the globe is immensely exciting. We are very much looking forward to our relationship with Foothill and developing a new CGI-animated series together.” The growing Mother Goose Club brand includes hundreds of live-action and animated videos—with foreign language versions currently in production—as well as original songs, an app, coloring books and online rhyme resources.
© Copyright Foothill Entertainment 2020 Privacy Policy Cookies Policy Disclaimer Terms